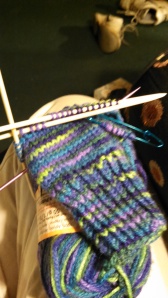 Right hand:
Cast on 36 stitches and divide over 3 needles. Work in K1 P1 ribbing for 2 1/2 inches. To make a tighter ribbing, when you knit, insert the needle as if to purl, making a twisted twisted knit stitch.

K 18 Slip 9 thumb stitches onto a stitch holder. Cast on 5 stitches and knit around until the mitten is at the desired length before decreasing.

Decrease: Divide stitches so that there are 20 stitches on the first needle, and the remainder split between the 2 other needles. First needle: K1 Slip 1, K1, psso, knit to the last three stitches on the needle, K2 tog, K1. 2nd needle: K1, Sl 1, K1, psso, knit to end. 3rd needle, K to last 3 stitches, K2 tog, K1. K 1 round. Continue decreasing until there are 9 stitches remaining front or back (or less, if you want a more tapered shape). You can either finish with a kitchener stitch or cut the yarn leaving about 8 inches and thread it through the remaining stitches on the needles with the tapestry needle, pull tight, and secure.

Thumb: Place the thumb stitches evenly on 2 needles, pick up 6 stitches over the 5 stitches cast on. Decrease 1 stitch on the inside of the thumb (14 stitches). K around for desired length (about 1 1/2 inches). Decrease for the tip: K2 tog, K2, until 7 stitches remain. Cut yarn leaving 7 inches and thread this through the stitches, pull tight, and secure.

Left Hand: Follow right hand directions until you are ready to make the thumb. Divide the stitches so that there are 15 on the first needle, 10 on the second, and 11 on the third. First increase row: K15, (second needle) M1, K1, M1, K around. K1 Round. Increase as with right hand, until there are 9 thumb stitches. K15, remove the 9 stitches to a holder, CO 5, K around. Continue as for right hand.

This pattern was adapted from “Scandinavian Snow Sets” by Kajsa Lindquist, published 1947. 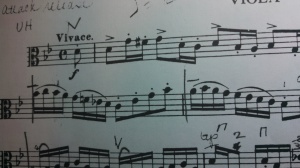 I decided a few years ago to learn the violin. December 2008 And here I am almost 6 years later, still playing, still taking lessons. One of the reasons I wanted to learn to play was so that I could play with other people easier (it’s hard to drag a piano around). Imagine my thrill when, a few weeks ago, my violin teacher said he might have found a string quartet for me to play in. With a catch. They need viola not violin.

If it was easy, everyone would do it. The trick with viola is that music is written in a different clef. Everyone who starts on piano, guitar, singing, whatever, learns treble clef and most progress to bass clef. Viola is written in alto (C) clef. It takes a big brain adjustment to start reading music in a different clef. You can see a sample in the photo. That piece of music (Bach) starts on the D above middle C, tempo vivace!

It was not until after I agreed to try viola, that I found out that violists are the butt of all jokes in the orchestra. I can handle it, I have a big one.

How do you keep a violin from being stolen? Put it in a viola case.

What’s the difference between a viola and a violin? The viola burns longer

Why does the viola burn longer? It’s usually still in the case

How do you get a violist to play spiccato? Write a whole note with “solo” above it.

What’s the difference between a viola and an onion? No one cries when you cut up a viola.

How can you tell when a violist is playing out of tune? The bow is moving.

Why is a viola solo like a premature ejaculation? Because even when you know it’s coming, there’s nothing you can do about it.

And so on. The tradition of making fun of violists goes back centuries  http://en.wikipedia.org/wiki/Viola_jokes. I kind of get it. Viola is the Eeyore of the orchestra. And who doesn’t enjoy laughing at someone else’s misery?

Walking around downtown Detroit, one can’t help but observe the faces. They are mostly sad, strange since they are all so old. Weren’t those the good old days?

Weather Report and notes to myself

This has been the coldest winter that anyone can remember. It was so cold one night, the roof timbers in the house were contracting with loud cracking sounds. Over 70″ of snow too.

With it being so cold this winter, I found I didn’t have enough wool socks, etc. So far this winter I have made 2 pairs of socks, 2 sets of leg warmers, 3 sets of wrist warmers, 1 hat, and I’m not done yet. Here is a bit of what’s been on the needles in Detroit:

Notes to myself: the wrist warmers are knit in the round with sock-weight yarn on size 2 or 3 needles. Cast on 40 stitches, K1P1 until desired lenght. I finished them off with crochet at both ends.

The leg warmers are knit in the round on larger needles, like size 8, with a double strand of yarn. I like contrasting or complementary colors. The legwarmers I made were with thicker yarn, worsted weight, for at least one of the strands. Cast on 44 stitches and K1P1 until the desired length. These I didn’t finish with a crochet edge.

Twas the 25th of January and no invitations had been sent,
The annual Burns’ Night dinner date came and went.

A week later, the table sparkles with place for ten
A Belated Burns’ Night supper at Lichfield Glen.

A ghostly dinner, no people on view
But plenty to feed the invisible crew. 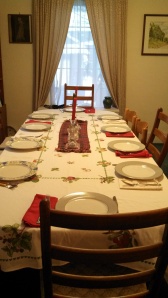 Smoked salmon, crackers, and cheese for all,
Yorkshire pudding and beautiful beef enthrall. 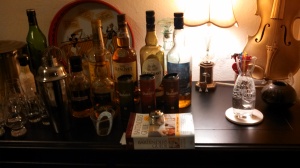 It’s kind of a tradition now to post about this, otherwise, I probably wouldn’t. Joe in the past week made several batches of anise crescents and a batch of chocolate/peppermint brownies. The problem with Christmas cooky making too early: those two are almost gone. Today he and I made a batch of pumpkin-oatmeal cookies (incredibly good), lebkuchen (ditto), maple pecan cookies, and molasses crinkles. Still to go: bourbon balls and caramel crumbles.The haul so far: 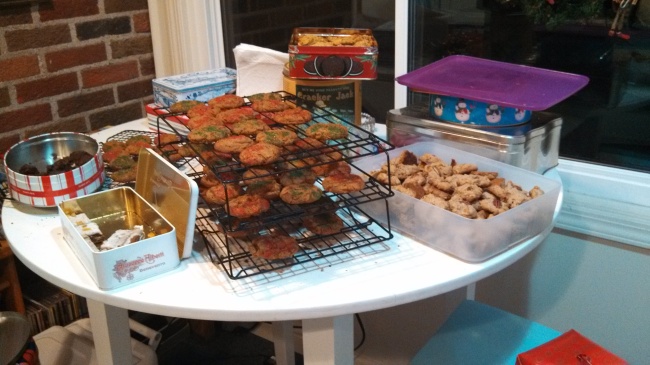 Detroit was home to the longest running state fair in the United States. The state fair grounds are located just a few blocks from my house. When the boys were little, we always walked to the fair and trudged home at night, exhausted. But alas, a series of economic downturns in the last 10 years left all government budgets pared to the bone. The Michigan State Fair was a casualty. So the grounds sat empty for several years, many plans have been (and continue to be–it’s a large parcel) floated for land use. One that got a lot of attention was for auto racing. Why not, in Motown? I’ll tell you why not. It’s extremely noisy for what is otherwise a stable, quiet residential area. Thankfully, that idea went bye-bye.

The northern-most section of land is now developed. It is a new strip mall with a great big, beautiful Meijer store. Meijer is a big box store with a local touch, being headquartered in Grand Rapids, MI, a city also known for its beer. Until now, the closest Meijer stores were miles away. Now there’s one less than a mile, a 5 minute drive. I can walk, as long as I don’t plan to buy much.

I give Meijer a lot of credit, too, for keeping a local touch. The most local touch is State Fair Pale Ale, brewed in Detroit by Atwater Brewery, sold only at this store. You can read this as irony, but I prefer to think of it as a tribute to what was. So, in my meandering way, here is a drink review of this beer.

It’s a pale ale: dry, bitter, and hoppy. If you like a soft, undemanding beer, this is not for you. The first taste was overwhelmingly bitter, but it has opened up in the glass and in my mouth. The bitterness is still there, but it’s balanced by a slight sweetness. I could drink this while wandering through the fair looking at blue ribbon chickens.

At work, one must find one’s amusement where one can. We are offered here a panoply of American names and trends in naming. Here are some recent examples that caught my eye, first names only:

And for the whole package, what were these parents thinking:

Food for Thought from Barcelona

Here are some photos of some yummy from Barcelona. I was particularly taken with the hams hanging around town.

A tapas bar being set up: 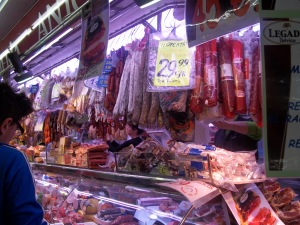 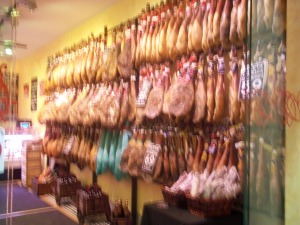 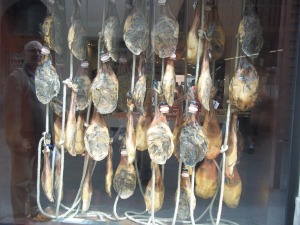 what’s left after the ham is taken: 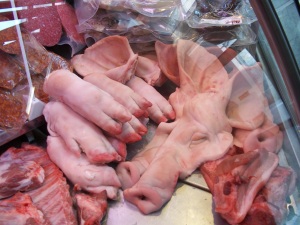 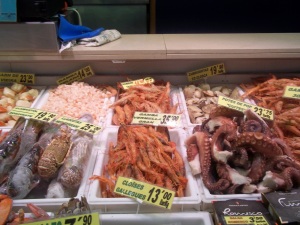 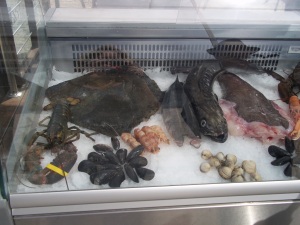 All that remains is to eat it, washed down with a little sangria: 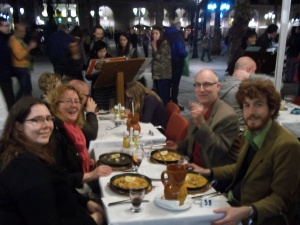